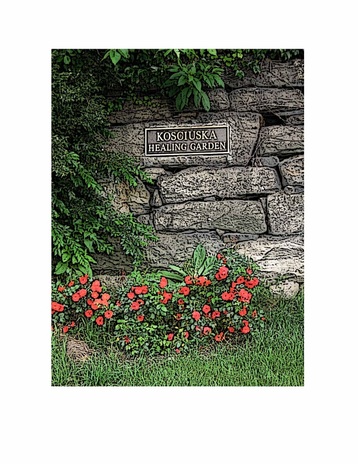 The Kosciuska Healing Garden holds the history of a communal riverbank garden and the stories of the legacy plants that grow there.

It serves as a memorial to the American Revolutionary General Thaddeus Kosciuszko in honor of Lithuanian Ruthenian and Polish Americans* and all peoples. It is located along a river just as Kosciuszko's centuries old garden on a cliffside along the Hudson River at West Point.

and to a small community of their descendents, in a neighborhood where
they made where they stayed beautiful - may we all ......


*it is the first public memorial in the world,  other than street names,  honoring Kosciuszko's Lithuanian ethnicity exemplified by the Lithuanian spelling of his name on the garden name plaque.
**between 1910 and 1920 more Poles and Lithuanians died in the coal mines of Pennsylvania than any other immigrant ethnicities:
3,177 & 1,199 respectively.
An Excel file at the following website lists all the recorded Lithuanian coal miners killed in the mines in the area from 1900-1920. The listing is by year : http://anthracitemuseum.org/library.htm