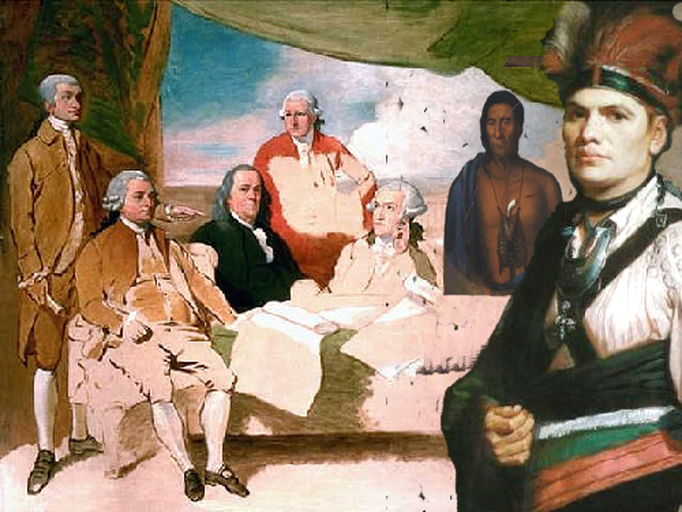 http://commons.wikimedia.org/wiki/File:Treaty_of_Paris_by_Benjamin_West_1783.jpg Lapowinsa: http://commons.wikimedia.org/wiki/File:Gustavus_Hesselius-Lapowinsa.jpg Joseph Brant: http://commons.wikimedia.org/wiki/File:Joseph_Brant_painting_by_George_Romney_1776.jpg
In this unfinished painting by Benjamin West entitled The Treaty of Paris 1783 several Native Americans stand in the unfinished space:
Tishcohan, a Lenape sachem who was one of the signatories of the Walking Purchase and Joseph Brant, a Mohawk leader of the Iroquois.
No Native Americans were present at the Treaty of Paris or at other ensuing European American treaties as England and the United States along with France and Spain divided up North America.
A common belief,  that the area never held permanent Native American settlements and only existed as a vast hunting ground wilderness settled and developed by immigrant settlers largely from England, can be found in a number of local histories written as recently as 2006.
Archeological evidence along rivers proves otherwise: discoveries have revealed evidence in the river valley from as far back as the Archaic Period (8,000 B.C - 1,200 B.C.) After European contact there is a mysterious drop off in artifacts during the sixteenth/seventeenth centuries pointing to mass die off from disease and/or wars and/or mass migrations.
When the forests were felled, dams constructed for mills and power, mines and breakers for fuel and canals and railroads for transport along ancient river paths, river courses and the water that flowed in them were drastically transformed. A massive local flood in 1882 revealed large deposits of middens  -  fresh water mollusk shells -  along with tools, pottery shards, bones and other evidence of permanent settlements. The depth and size of the deposits proved without question that there had been centuries of habitation along the river valley long before the 16th century.  Fresh water mollusks that form middens have left a record across North American rivers that includes a massive drop off in middens even before European contact  - at least 5 centuries prior to the 1500's. That drop off appears to parallel the development and spread of maize agriculture in North America.  There is a direct relationship between how we treat the earth and our water.
Native Americans mentioned in early histories of the area include the Lenni Lenape, the Iroquois, Mohegan, Tuscarora and Shawnee and Nanticoke.
The last known Native Americans to have a settlement near the garden less than 2 centuries ago were the Munsee. Native American settlements during that time were located along rivers next to fertile bottom lands where they had extensive permanent orchards of apple and other fruits along with annual crops of corn, squash and beans. In addition they maintained the skills of the hunter gatherer and hunted elk, deer, bear and other indigenous mammals as well as harvesting and drying annual staples from the river such as fresh water mollusks, shad and eel.
Shad and eel have disappeared within the last century. Few residents know of their former existence in the river and of their value as essential staples, as local sustainable food sources. Ancient weirs to capture fish and and eel on their seasonal runs were always designed to allow many fish and eel to pass through safely - assuring a future supply.
Today, several sport species of fish farmed in hatcheries have been reintroduced to the river and are now able to exist in sections of the river. It is still not advisable to eat the fish from the very same water that is treated for drinking water for hundreds of thousands of people in cities along the rivers.

North American streams, rivers, and lakes support the richest diversity of freshwater mollusks on the planet. Over 650 species of snails and 300 species of freshwater mussels have been described by scientists so far. While there are species associated with every type of aquatic habitat, the greatest diversity is found in flowing streams.

Our freshwater mollusks are not only a fascinating part of our natural heritage but have global significance. As a group, they serve vital functions in freshwater ecosystems and many species are commercially important. Their life history is amazing, and the behavior ranges from the simple to the bizarre and unbelievable.

Unfortunately, freshwater mollusks are the most imperiled group of animals in America, and many populations are disappearing at an alarming rate. This decline is telling us something because mollusks are good indicators of healthy ecosystems. What is happening to our nation’s freshwater systems? How does this affect people?

Information about the American eel: http://www.fws.gov/northeast/newsroom/eels.html