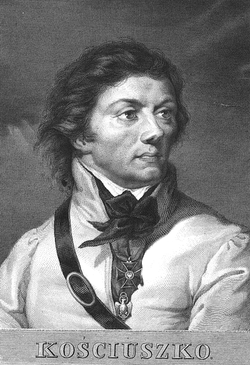 http://commons.wikimedia.org/wiki/File: Tadeusz_Ko%C5%9Bciuszko_1.PNG
Thaddeus Kosciuszko was the first guardian and defender of American Rivers. The first guardian and defender of our water.
In the United States, Kosciuszko is largely remembered for his military engineering efforts on the defensive fortifications at West Point during the American Revolution. Kosciuszko was  born to a Polonized minor noble family of Lithuanian Ruthenian ethnicity in a small village between the sacred oaks of the Bialowieza Forest to the west and the ancient Pripet Marshes to the east on land then part of the Grand Duchy of Lithuania. At that time Lithuania was united with Poland in the Republic of Two Nations. Today Kosciuszko's birthplace is located in Belarus. He was steeped in the cultural ethos of that land: a direct and intimate relationship with environment/nature. That foundation in combination with his intellectual and artistic and military pursuits in Poland, France, Saxony, Italy  and the United States created one of the foremost exemplars of an Enlightenment yet to be fulfilled, an Enlightenment that flourished on scientific knowledge yet floundered when it came to the acceptance of the responsibility for the proper application of that knowledge to society. Kosciuszko's life reflected the acceptance of that responsibility more than any other figure of the Enlightenment, a responsibility he was politically prevented from fulfilling.

Kosciuszko's first project in America in 1776 was the design for Fort Billingsport on the first land purchased by the Continental Congress July 5, 1776. The fort was sited at the narrowest point on the Delaware to prevent the British from entering the river to attack Philadelphia, the first capitol of the United States. Although the fort was never fully constructed it protected Philadelphia and withheld the British assault for an entire month.

For millennia, Billingsport was a perfect site for shad fishing.  Swedish inhabitants, the earliest European immigrant settlers in that area, named the site Manta's Hook, derived from the indigenous Lenni Lenape name for nearby Mantua Creek, Manta is Native American for frog. "It was so named because of the remarkable chorus effect produced by abundant frogs in its watershed."** Today that chorus is silent.

After his work defending the Delaware, Kosciuszko went on to help design and construct defenses for the Hudson River at West Point where he also designed a cliffside garden still in use today. Kosciuszko's Garden is one of the oldest gardens in the United States, and, unlike other centuries old American gardens,  was not created or ever maintained by slaves. It was maintained by Kosciuszko and to this day by others who contribute and volunteer of their own free will.  Kosciuszko openly opposed slavery. Upholding his belief in the social responsibilities of the Enlightenment he openly acknowledged that American slaves should be free. His American will requested that the money he earned in the United States be used to free and educate slaves. His wishes were never fulfilled.***

The Kosciuska Healing Garden is the first sister garden to Kosciuszko's centuries old garden at West Point. It is hoped that more will be raised along rivers everywhere by citizens everywhere - of their own free will in a renewed awareness of the value of our rivers.
After West Point , Kosciuszko engineered defenses for the Southern Campaign which included defensive maneuvers along the Pee Dee,
Catawba and Dan Rivers.**** The triumph of the United States at Yorktown near Chesapeake Bay, the ria of the Susquehanna River, was enabled in large part by the victory at Saratoga - a battle plan engineered by Kosciuszko. After that decisive American victory the French openly allied with the United Sates. Their fleets blockaded the British at Chesapeake Bay and their armies, fighting along side American troops, contributed greatly to the British surrender at Yorktown.

After Kosciuszko's final departure from the United States, Thomas Jefferson wrote him regarding the American freedom he helped engineer using a most appropriate gardening/nurturing metaphor:

"The tree which you had so zealously assisted in planting you cannot but delight in seeing watered and flourishing."

* For further info regarding Billingsport: http://www.freerepublic.com/focus/f-news/1937674/posts
**Mantua Township Clerk’s Office: A Brief Tour of Mantua Township History, last modified on June 3, 2011, citing “A Bicentennial Look at Mantua Township”, presented to the Township on Memorial Day, May 31, 1976.
Further inspiration regarding frogs and rivers  is recommended by viewing the movie "Emerald Forest"
*** see Friends of Liberty   by Gary Nash and Graham Russell Gao Hodges
**** today 4 out of 45 high hazard coal ash impoundments are located on the Catawba River that supplies drinking water for 860,000 people:  http://www.catawbariverkeeper.org/issues/coal-ash
The Pee Dee River delta was a center for rice cultivation. The industry drastically declined with the end of slavery. Two hurricanes at the beginning of the 20th century ended the once profitable industry.
In 2014 the Dan River was damaged by one of the worst coal ash spills, 82,000 tons of coal ash in Eden, North Carolina.
"Our water infrastructure regularly gets some of the worst ratings by the American Society of Civil Engineers and there are thousands of dams that clog our rivers for no purpose that have been forgotten over the decades an now are only creating safety hazards and covering up fish habitat. With some ingenuity we can move away from these old ways and restore our streams and manage our water in a more sensible fashion." - See more at: http://www.americanrivers.org/blog/dan-river-coal-ash-spill-one-of-the-worst-in-history/#sthash.
Peter Raab, The River Blog: http://www.americanrivers.org/blog/dan-river-coal-ash-spill-one-of-the-worst-in-history/