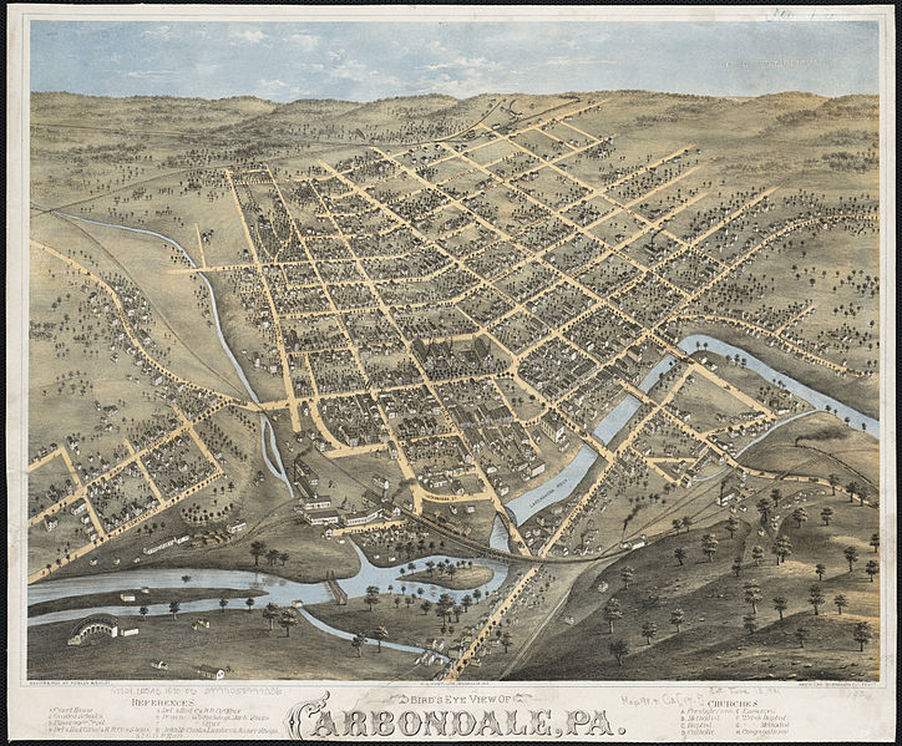 Carbondale City History
--incorporated in 1851 from Carbondale Township as the first city within the anthracite region of the Commonwealth. The area was acquired by William and Maurice Wurts of Philadelphia as partial payment for a government contract to supply army clothing during the War of 1812. The name Carbondale is derived from the presence of coal deposits in the area, "the dale or valley where coal is found." The
first underground coal mine in the United States opened in Carbondale, known locally as the "Pioneer City." The Wurts brothers formed the Delaware and Hudson Canal Company to transport the coal to Honesdale via a gravity railroad and then to New York by canal.
Carbondale Township History
--created in 1831 from Blakely and Greenfield Townships. The pioneer settler of the township was David Ailsworth, who came from Rhode Island in 1802.
http://www.lackawannacounty.org/uploads/COUNTY_LINES_2008.pdf
​
David Aylsworth's (variant spelling) wife Ruth is buried in the sorely neglected early American Meredith Cemetery. It is one of only two inscribed tombstones; the other being Thomas Meredith's infant son. Thomas Meredith Sr. was the son of Samuel Meredith the Treasurer of the United States with Secretary of the Treasury Alexander Hamilton. His vast land holdings granted as payment for his financial support of the American Revolution included the land currently owned and conserved by this author.


...the powerful Delaware and Hudson Canal Company in the mid-1820s. This corporation, the largest of its time, had big plans for Carbondale. Originally, the company intended the small community to become the grand emporium of northeast Pennsylvania.
Carbondale had important advantages. It was close to the rich anthracite reserves of Lackawanna County and yet it was also not too far from the major market in New York City. The nearby D & H Canal and gravity railroad guaranteed that Carbondale would play a central role in the movement of Pennsylvania coal from mines to markets. It also led to many "linkage industries" that developed around anthracite production: small shops that specialized in much-needed services, like repairs, or parts. The population in Carbondale grew quickly and soon it was twice the size of more-established Wilkes-Barre.

Carbondale, however, never quite achieved the status its founders had envisioned. There was a multitude of reasons for the community's eventual decline, including a weak municipal infrastructure and an almost complete economic reliance on anthracite. The result was a dangerous and dirty place, "among the dingiest," according to historian Burton Folsom, of some very dingy, nineteenth-century industrial cities.

The underground mines, once the pride of Carbondale, also eventually haunted the troubled community. During the twentieth century, a fire erupted in one of the city's abandoned mines that burned for thirty-three years before it was finally extinguished.
http://explorepahistory.com/hmarker.php?markerId=1-A-E9

Over the years the numerous efforts to extinguish the mine fires has resulted in more dirt being dug than for the Panama Canal.
Information concerning one of the mine fires is available in the 2011 book: The West Side Carbondale Pennsylvania Mine Fire by Kathleen Purcell Munley.
The novel Hollow Ground by Natalie S. Harnett was inspired in by Carbondale mine fires.  http://natalieharnett.com/hollow-ground/ 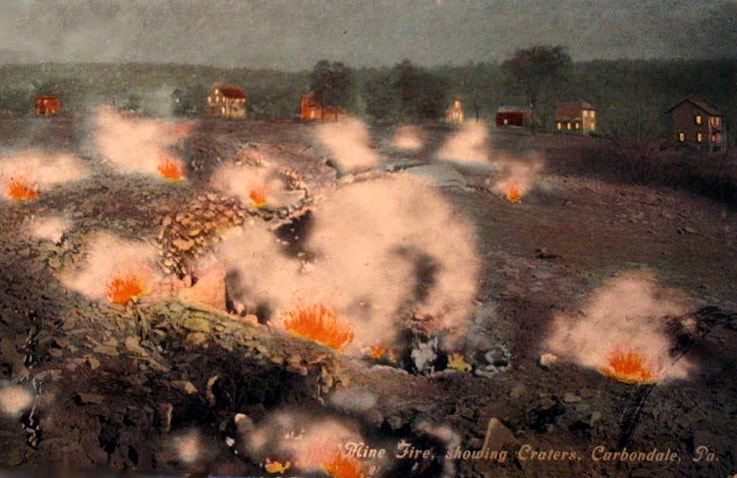 1911 postcard of a Carbondale mine fire

Mine Fire Stories from the early 1900's 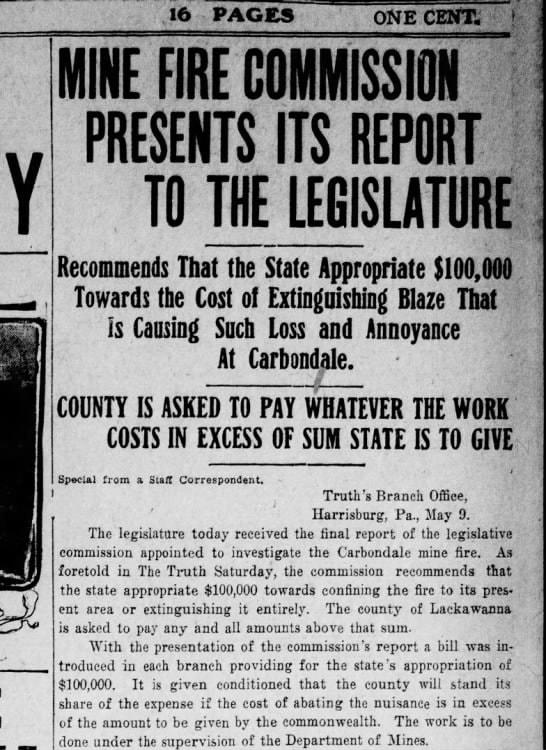 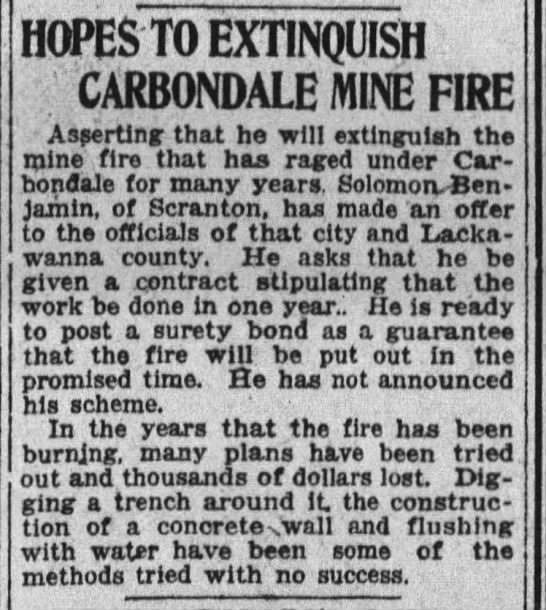 Mine Fire Stories from the early 2000's:
2002 - Mine fires continue ...."And on the outskirts of Carbondale, 15 miles from Scranton, a mine fire moving faster than Centralia's forced federal engineers two years ago into a costly emergency effort to cut it off. They still monitor the site for a week each month, unsure that the fire is truly contained."
​
The danger to gas lines currently being constructed across the northeast is already a reality for Pennsylvanians in the soft coal mines:
"In Plum, a Pittsburgh suburb, a mine fire has come within 800 feet of natural gas wells on the edge of a public park. Last month, the state began a yearlong, $1.2 million effort to dig out all the burning coal, an estimated 367,000 cubic yards."
The Baltimore Sun, August 29, 2002 http://articles.baltimoresun.com/2002-08-29/news/0208290377_1_mine-fire-coal-fires-coal-mine

2015 - fire still burning : On privately owned land in the Carbondale area $8,947,731.84 was provided by the federal and state governments to extinguish and reclaim land damaged by mine fires. See presentation by Pennsylvania Department of Environmental
Protection: http://files.dep.state.pa.us/RegionalResources/NERO/NEROPortalFiles/PowderlyCreekMineFirePresentation.pdf
​
As of Sept. 2016 - fire still burning: http://paenvironmentdaily.blogspot.com/2016/09/powderly-mine-fire-reclamation-will.html
​

​Lithuanians in Carbondale - The "Other Element"


Locating information on Lithuanian Americans In Carbondale was difficult. This author relied on local resources - largely  personal experience and newspaper stories.  Lithuanian Americans were present,  in strong enough numbers to have a speech presented in Lithuanian at a Labor Demonstration that took place during the 1902 Anthracite Coal Strike at the Carbondale Semi-centennial Jubilee. The demonstration included nearly 2,000 participants who came to hear the President of the UMW of A,,  John Mitchell, Mother Jones and other noteworthy union organizers. The Scranton Tribune newspaper edition of September 4, 1901 made no mention of the speech in Lithuanian. The Scranton Republican did, with the distinctive sub heading below: 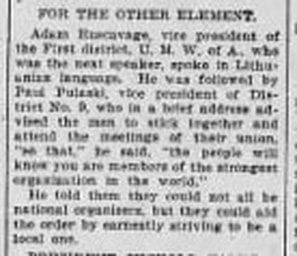 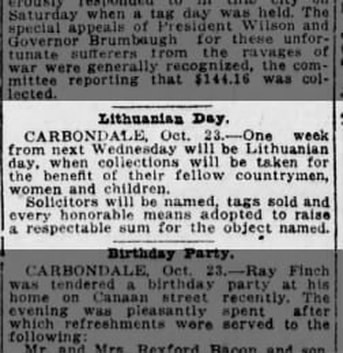 Scranton Republican Oct. 24, 1916 Tuesday
Although there was no Lithuanian parish in Carbondale, St. Anthony's Parish in Forest City was @ 6 miles away and several Polish churches in closer nearby towns such as Simpson and Mayfield drew the Lithuanian Roman Catholics from Carbondale.  A  funeral notice for Lithuanian coal miner Michael Butsavage in the July 27, 1925 edition of  The Scranton Republican bears that out: 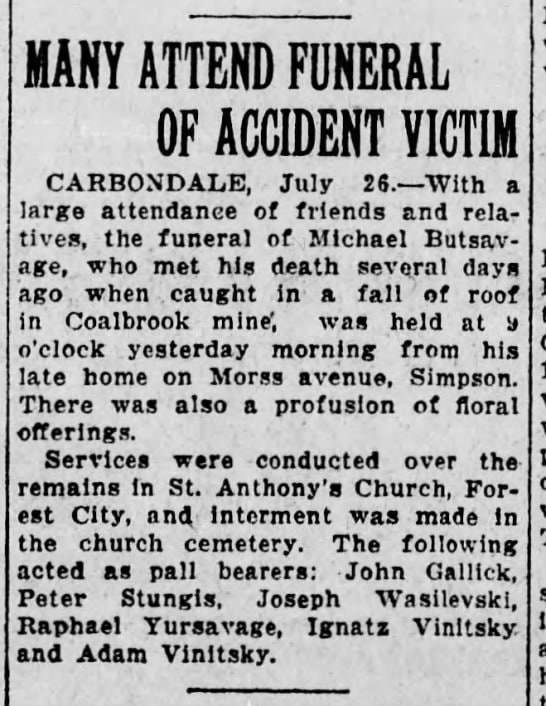 A synagogue was also located in Carbondale. There's little  doubt it was the place of worship for many Eastern European Jews,  including Lithuanians.  Beginning in 1881 a wave of pogroms against Jews swept over Russian territory that included Lithuania and spread as far as Poland. Over 4,000,000 Jews fled Russian territories for the United States between 1881 and 1914.  The synagogue in Carbondale was called the Society of Peace. The laying of the cornerstone in 1907 drew a crowd of 1,000 from numerous faiths and nationalities; The Scranton Republican, Monday, September 16, 1907:

The synagogue is no longer standing. Today the cornerstone rests at the left front corner of the Jewish cemetery which lies in front of the Thomas Meredith family cemetery close to the intersection once called Meredith Corners, today Childs. The Meredith Fire Department is located nearby and the exit from the Casey Highway that leads into Carbondale is called and enters Meredith Street.  The Jewish Cemetery is extremely well kept. Thomas Meredith's family cemetery is completely overgrown with a toppled obelisk that says "Mother", that of Ruth Aylesworth,  and another cracked and damaged tombstone for Thomas Meredith's namesake and  infant son. The author draws attention to the site as an emblem of  forgotten history.  It is located a short distance from  a national "Heritage Trail."  Not only Lithuanian local history is being forgotten, so is that of the early Welsh Quakers who from 1681-1700 were the largest immigrant group to Pennsylvania. Thomas Meredith was the son of the Welsh Quaker Samuel Meredith whose financial contributions to the American Revolution along with others such as Hayam Salomon were integral to its success.

Lithuanian benevolent societies were formed in Carbondale as well as a chapter of the Knights of Lithuania, the Bishop Klonowski Chapter  which no longer exists.  The Lithuanian American farmer who tended the farmland surrounding the author's property, was one of the founding members of that chapter. He was truly a gentleman farmer who treated his farmland and mine - as a work of art.  While a resident in the area he woke one day to find a cross burning on his front lawn.  Despite the cohesion and cooperation of many of the immigrant communities as displayed in the laying of the cornerstone at the synagogue there were others filled with resentment. The irony lay in the fact that they could not have resided here any longer than the immigrants they hated.

More than Mine Fires Burned

​Chapters of the KKK were active in the area. The hubris continues today. A 2006 local history video of a nearby community included an interview with someone who had participated in cross burnings. When asked why - he  justified the practice with the response that he and the young men  of the area were bored; there was little to do on weekends. Several news stories below cite cross burnings in Carbondale. Culm and ash dumps, the piled refuse of the coal mines, were favorite sites to pitch burning crosses - barren of trees they towered over the city as immigrants toiled in the mines underneath: 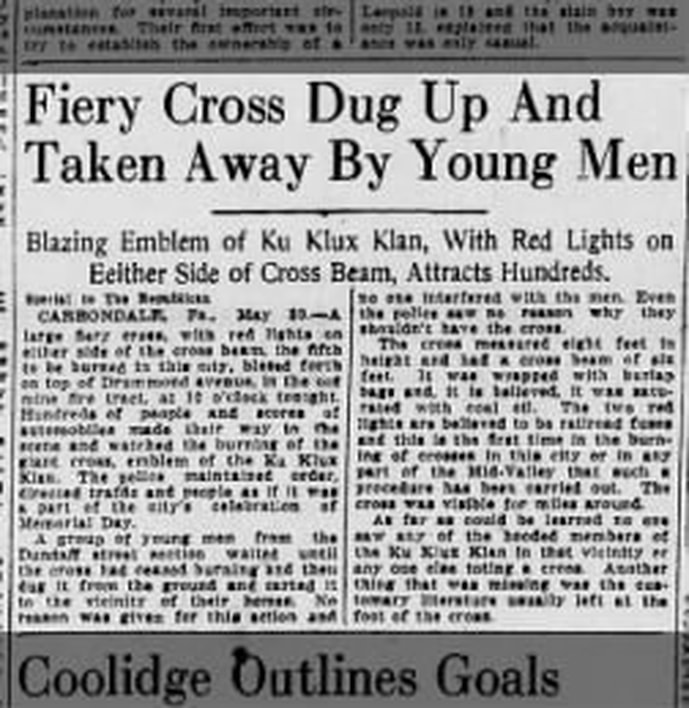 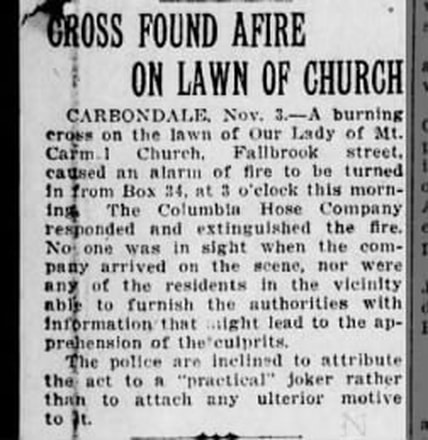