​Not anymore: In 1959 the Knox Mine Disaster (see startling video under tab on Pittston) began the watery end of deep coal mining throughout the Lackawanna Valley. Below Carbondale water increasingly replaced fire filling the mines. The deep anthracite coal mining that spurred the development of cities along the Lackawanna River ended. Populations dropped as the unemployed left to hunt for jobs elsewhere; tax revenues plummeted. The garment industry relocated elsewhere, even the last Nottingham lace manufacturing plant in the world closed. Today tourism that stresses the local history of coal mining and railroads strives to draw income to the valley. The history is integral to world history for it was the coal miners of northeastern Pennsylvania who fueled the Industrial Revolution. In an amazing irony - hundreds of railroad coal cars were pushed from tracks into the Susquehanna in a vain effort to save the mines. (view video in section on Pittston)
​ 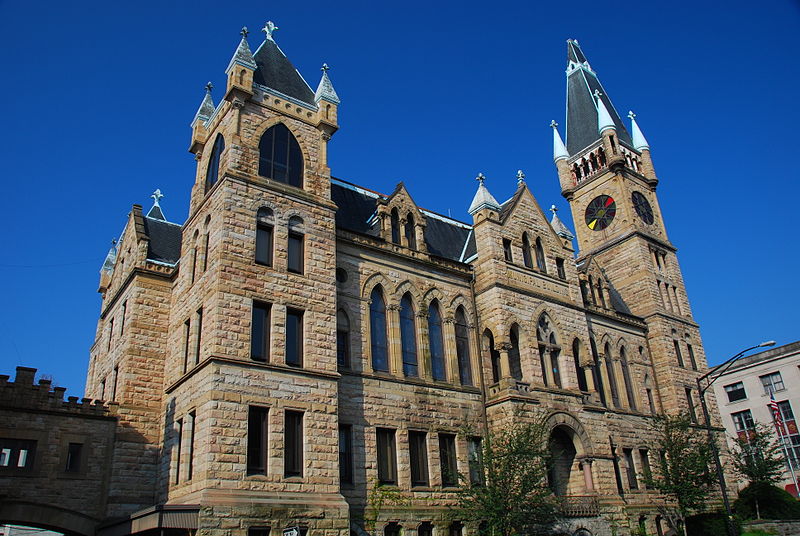 https://upload.wikimedia.org/wikipedia/commons/thumb/7/77/Scranton_City_Hall.JPG/800px-Scranton_City_Hall.JPG
Above ​​the city of Scranton, once called the Electric City, prior to that the Lantern City,  rose windows in the 8 story bell tower of the Scranton Municipal Building /City Hall reflect the sun's light through the colors of the Lithuanian flag across and over the city. The stained glass windows were designed by a Lithuanian American.
Knowledge that the designer of the windows was a Lithuanian American was provided to the author by the former Mayor of Scranton, Christopher Doherty. No one knew what architect Vytautus Petrauskas was doing with his colors. They shine today over the city where so many Lithuanians made their homes and gardens. A statue of Kosciuszko with the names of its Polish and Lithuanian donors stands on court house square a block away; on another corner, more Lithuanian and Polish names on the statue of Pulaski; on that same square a statue of John Mitchell, the leader of the United Mine workers.
Vytautus, an architect and artist who eventually moved to the area after the second wave of Lithuanian immigration, died 6 years after the installation of Lithunania's solar light for the city of Scranton -- and the world.

The section on Scranton will be lengthy. Scranton had one of the longest existing Lithuanian schools in Pennsylvania. It closed in 1980. The city played an important role in the founding of two Lithuanian orders of nuns and the founding of a new dissident Catholic denomination. It also played an integral role in the fight for the independence of Lithuania.  While in the Baltics after World War I an  American foreign correspondent remarked on the two things he noticed most in Kaunus (then the new capitol): no lack of food - somehow even herds of cattle had managed to survive the war hidden by the peasants in the ancient swamps and forests; and the second dominant feature -the "returned Americans" who spoke to him "in the vernacular of Chicago or Scranton, Pennsylvania." p.204 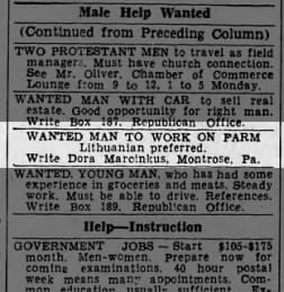 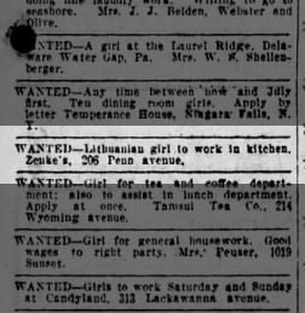 The Providence Section of North Scranton

The largest Lithuanian enclave in Scranton was located in the north Scranton section called Providence.  Prior to the American Revolution  the area had been occupied by the Lenape Munsee and was called Capoose Meadows after the leader of the Munsee. The surrounding mountains were once called Capoose Mountains. Recent archeological excavations along the confluence of the Lackawanna and Susquehanna  Rivers has verified  indigenous occupation dating from the bronze age and includes physical evidence of indigenous cultures as ancient as  the Adena.
The majority of local histories will claim that the area was uninhabited - with the exception of the Lenape and remnants of other tribes
such as the Tuscarora, Shawnee, Conoy, and Nanticoke who were fleeing slavery and extermination and allowed to dwell in the area by the Iroquois who had gained control of the area by the time of the American Revolution. Cultural awareness is subject to domination. Although a dominating culture dictates history and experience, the rivers remember.

​Lithuanians like other minority ethnicities strove to blend in to prevent violence and discrimination.  Names were Polonized, Anglicized -- today Lithuanian owned businesses are impossible to distinguish by name. With the closing of nearly all Lithuanian churches the story of Lithuanians in the area is becoming invisible and lost. Two once Lithuanian churches remain open -- one under the auspices of the Polish National Church founded and headquartered in Scranton and  the other under the auspices of the Priestly Fraternity of St. Peter whose  current superior general was consecrated into the priesthood in Scranton in 1997.

The history of the struggle for freedom and respect for the Lithuanian nation had roots in the mines of Pennsylvania. It is more than appropriate for Lithuanians everywhere to be aware of that history.

​Awareness of Lithuanian culture was inspired from daily experience with one's relatives who had immigrated here. It was  buttressed by the respect afforded that culture from Lithuanian American educators such as the Sisters of St. Casimir, an order with strong ties to Scranton. During the era of greatest immigration, the order was one of the most important guardians of Lithuanian culture in the United States.


The integral importance of the North Scranton community to the development of Lithuanian independence has been ignored far too long. The author is committed to establishing that awareness.


The silence of relatives regarding ancestors is always tragic.
If ancestry does not provide a record of dominance over others it seems it is not worth knowing. With the acceptance of that loss we fail to understand who we are.
​We fail to understand that dominance is delusion.  Animals know it is only as a temporary element of cooperation.

Today Lithuania, a tiny nation, once an empire, embodies the future........perhaps of everyone.
It's history a fractal of all empires, and many nationalities - with an astonishing difference -- hope.
A hope kept in the hearts of its people for over a century -  on native soil and thousands of miles away - one that even though it was based on a geographic site  - lept beyond any boundaries into the hearts and souls of lands everywhere

Many influential American Lithuanians spent time in Scranton:  Alexander Burba, Michael Peza and his nephew Jonas Zilinskas,  Anthony and Maria Kaupas,  John Kuras, and Jonas Sliupas.
-
If one researches the immigration records of the early Lithuanian immigrants you will find their records say they are German, Russian even Polish. Although both of my Lithuanian grandparents who immigrated to Scranton in 1902 and 1906 gave a Lithuanian village as their home - they listed their nationality as Russian until the 1920 census.